A2 is a Boss in Nier: Automata. A deserter from YorHa, she is an older model of android that have spent years fighting alone and surviving from experience.

"The A model is a YorHa prototype that specializes in close quarters combat. Though not presently in use, it was originally created to speed along the implementation of other offical models such as 2B and 9S. This particular unit, whose official title is Class A Number 2, was wanted by command for desertion and ordered to be destroyed on sight. (...)"

You fight A2 from a sidescrolling perspective, she has a fighting style similar to 2B but is better in every way. Keep holding down the fire button on your pod to keep the pressure while dodging and countering her attacks, she can be easily staggered if you are using a large sword or a weapon with a stun ability. Once she disappears from the screen there are two types of attack that going your way, either a dash or an overhead slam. The dash can be avoided by simply jumping or dashing opposite to where she comes from (she always come from the right of the screen) while the overhead slam can be avoided by simply dashing anywhere not below her. After you do enough damage, a cutscene will trigger.

The fight is pretty much the same as the previous one, but this time she is acompanied by Pod 042. Keep to the same strategy while at the same time avoiding her own pod attacks as well. One thing you need to be on the lookout for is her dash, which is now deadlier and faster. After you do enough damage, she will ocassionaly retreat from the main area to a high ground protected by a barrier, when she does this, hack her for massive damage. 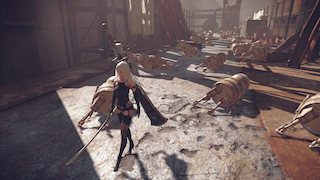 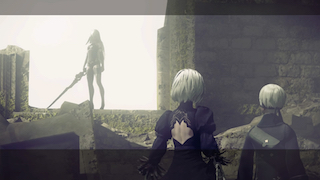