Auguste is a Boss in NieR: Automata. Auguste is a Special Unit Machine that is encounters as YorHa A2. Bosses are special larger Enemies that can be encountered throughout the game in different Locations. A Boss encounter will usually signify game progress or a chapter ending when following the main storyline. Some of these bosses may first be encountered As NPCs to introduce some Lore and backstory before they are inevitably faced in a Combat encounter as a Boss. Boss encountered are identified by their introductory title that will be displayed just before combat begins. Their HP bar and Level will also be displayed above the character throughout the combat encounter. Some bosses in the game may be optional and avoided. All information on optional or required bosses stats, Locations, encounters and strategies can be found on their designated Bosses

A machine lifeform that plays the role of older brother to countless followers. It has the appearance of a standard medium-sized biped save for its arms-- which are formed from a number of linked-sphere type machines. Be wary when approaching, for it has been known to displays tremendous anger when its brothers are harmed.

Auguste is a big brother to a number of Machine units who will join him in battle and will usually fight at Lv 50. When he is defeated, his brothers disengage in combat and begin to beg for mercy. The player will then have the option to spare them. This changes Friedrich's Unit Data.

He is encountered in the main story when Yorha A2 is active. You'll find him in Chapter 16-04: A2 and the Machine Siblings.

Chapter description: Operator 210, wounded by 9S, is finished off by A2. 9S turns his fury onto A2 when a new foe appears below, and he descends, leaving A2 to fight the new enemy machine's brother.

Auguste is a boss that relies on its arm machine parts to attack. He has several attack options and is accompanied by a number of Machine Lifeforms that will aid him in Combat. These Machine Lifeforms will stand at a level slightly lower than Auguste, Level 50. They can be faced and countered just like any other Standard Machine enemy you have encountered in the game. You should focus your attacks mostly on Auguste unless the Machine units begins to surround you or get too close. Weave your way through each of his attack to be able to circle around him and deal a few melee attacks.

A few of Auguste's attack involves dispersing the machine parts on his arms, these attacks will usually give you openings to approach. Attacks to avoid are his AoE spin attacks that affect the area around him. His larger spin attacks can be jumped over or dodged through once it is initiated. When you see his homing attack begin, start to distance yourself to avoid contact. His arms will trace you for a short duration. During this time, you can clear any other machine lifeforms in your path.

When facing him, try not to linger directly in front of Auguste to avoid its frontal slaps and clap attacks. You're less likely to be affected from his attacks from the side or if you try to get behind him. Throughout the encounter aim to get to his side, or quickly advance in between his close range attacks to deal your own set of attacks before repositioning. If he initiates an attack where his parts disperse away, these are also opportunities to approach and attack. Clear the other machines as they approach, but they are not the priority. This will slowly wear Auguste down and you will be able to complete the encounter.


Once he is defeated, the other machines will surround him and beg for mercy. At this point you can choose to finish him off or spare him. 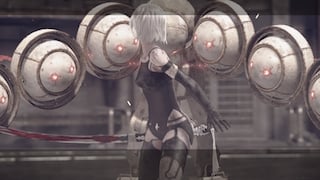 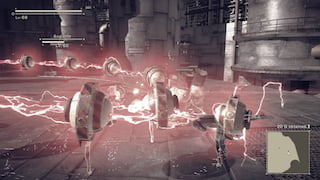 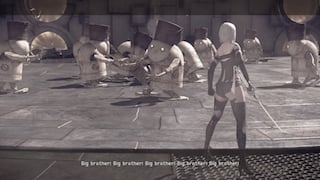