Beauvoir (aka Simone) is a Boss in NieR: Automata. She is a Machine Lifeform Opera Singer obsessed with Jean-Paul. She is a required boss encounter in the game to progress in the main storyline. Bosses are special larger Enemies that can be encountered throughout the game in different Locations. A Boss encounter will usually signify progress, or a chapter ending when following the main storyline. Some of these bosses may first be encountered As NPCs to introduce some Lore and backstory before they are inevitably faced in a Combat encounter as a Boss. Boss encountered are identified by their introductory title that will be displayed just before combat begins. Their HP bar and Level will also be displayed above the character throughout the combat encounter. Some bosses in the game may be optional and avoided. All information on optional or required bosses stats, Locations, encounters and strategies can be found on their designated Bosses

A Goliath-class machine lifeform modeled after an opera singer, this unit attacked foes using the repurposed bodies of living androids. Obsessed with a certain other machine lifeform, she put great thought into her appearance - even going so far as to cannibalize her own kind. Alas, such garish decorations only ended up being a spectacular display of poor taste. Her search for beauty eventually led to her demise when she attacked 2B and 9S.

Her health increases after her first encounter in Route A. She is usually encountered after Goliath Tank Combat sequence during the MIA quest. Go past the Clown Machine up the stairs to meet a boss, the Goliath Tank (Amusement Park). Defeat it and obtain a Machine Core. Go up the nearby stairs and jump on the Roller Coaster to take a ride - some enemies will attack you so be on your guard! You will eventually jump down the ride and face Beauvoir. This will fulfill the objective: Destroy the new Goliath class machine.

When she starts rotating around the arena, spewing fire you'll want to stay active and airborne to avoid the damage. Eventually she will stop and will let off a series of concentric lasers that increase and then decrease in size. This is a bit of a timing game and you'll want to avoid their spacing stepping forward gradually until you can attack her again. Eventually she'll turn around and go back to the stage. She'll then initiate a burst that triggers a hacking minigame. In the hack, you'll want to shoot out the black boxes and then destroy the black orb.

Afterwards she'll begin to call down corpses on crosses that will shoot ringed energy at you. You'll have to destroy them all. Mind the energy waves she calls out to avoid more hacking games. Hop over them as they approach. Otherwise the hacking games will get increasingly more treacherous, with the bouncing black orb tossing its own ammo at you. After you destroy the crosses, she'll make her way back into the arena. You can unleash a barrage until she begins to flail around. Eventually an apparatus will emerge from her undercarriage that will lunge at you. Keep your distance and press your attacks. Eventually she will be defeated and a cutscene will play. 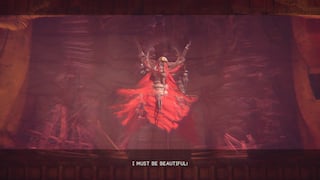 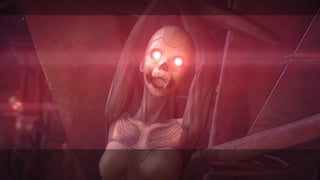 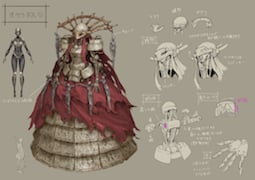