Jean-Paul's Melancholy \ Sartre's Melancholy is a Side Quest in NieR: Automata obtained from Sartre (Jean-Paul) in the Machine Village which gives extra (EXP), items, and occasionally even weaponry for completing any of the side tasks. Most of the side tasks available to you can be completed during playthroughs with all characters. You won't be able to go back to earlier regions in various parts of the story, which may prevent you from completing some of these side missions until later.

"The machine lifeform known as Jean-Paul lives in Pascal's Village and speaks in byzantine philosophical passages. Talking to him proved a frustrating—and fruitless—endeavor, so speak to his female admirers to learn more about him.
A woman in Pascal's village explained that Jean-Paul has additional followers in the amusement park and desert. Find these two fans, then give their presents to Jean-Paul.
Jean-Paul seemed rather... nonplussed about the gifts. Go tell the three fans how he responded.
Despite being rejected by Jean-Paul, his followers made no attempt to see him for what he truly was. As Jean-Paul also had no interest in understanding his followers, he began to question the overall meaning of the relationship."

"After visiting Jean-Paul again, you learned that he left a letter behind before departing on a journey. He devoted himself to philosophy to the very end, never once taking notice of those who held affection for him."

Speak to the Machine with Makeup.

This quest unlocks upon your return to the Machine Village after the Assault event. To find the NPC for the quest, go in and past the Weapons/Item shop, up a ladder and right until you see a platform exiting to the right. Follow it to find Sartre, a hat-wearing machine. Next you return to the middle portion, go left and down a ladder, then take a right from the ladder and access point. Talk to the Machine with Makeup and you will receive Letter for Sartre (Jean-Paul), you must take it to Sartre (Jean-Paul). He won't even bother responding to the letter, but talking to the machine with makeup again reveals she does not care. 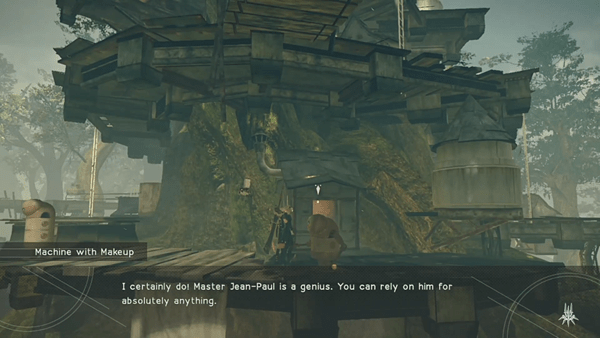 Speak with the machines in love and with a dream.

Find the other fans, one in the Amusement Park, it's the Machine with a Dream, located on your left as you come up the main stairs. She gives you a Beautiful Glass to gift to Sartre. He will call it a trifle and say no reply is needed.

The other one in the Desert Housing area, Machine in Love gives you a Machine Fossil to gift to Sartre (Jean-Paul). He will say he will not waste words on mere junk. 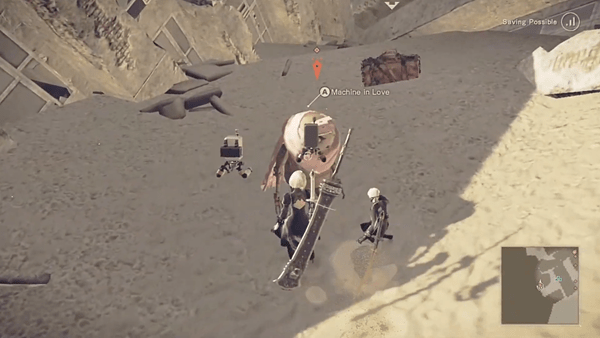 Report back to Sartre.

Tell all of the followers of the rejection, then return to Sartre (Jean-Paul) once more. He will not be there, and the Ball-like Machine will tell you he left on a journey. You will obtain Sartre's Letter (Jean-Paul's) x1. 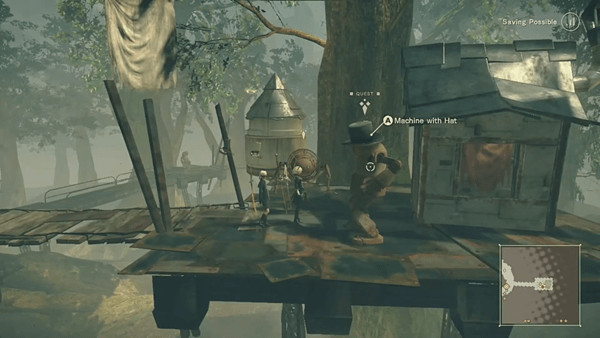