New Game Plus in NieR: Automata is a unlockable game mode which lets players start another playthrough of the campaign with the gear that they earned during the first play through. When beating the game for the first time, you will achieve Ending A. Save your data to begin a second playthrough with all of your gear and progression intact. Load up this save to start the subsequent playthrough for Ending B.

Does Progression Carry Over in NieR Automata?

The majority of New Game Plus options carry over your progress in terms of items, gear, and level into your subsequent playthrough. In NieR: Automata, the adversaries do not scale with level, therefore you will suddenly be significantly more powerful than your enemies. This is an excellent way for you to re-experience the plot without having to worry about combat because you'll probably breeze past all of the common foes now that you're leveled too high for them. 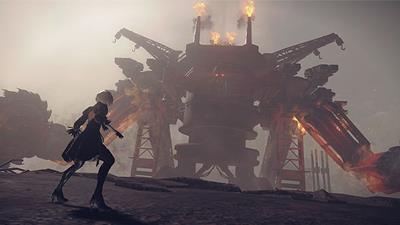 More alternative game features become available after completing the game three times with all three androids 2B, 9S, and A2. Chapter Select is a wonderful addition to one of these. You can easily finish anything you didn't finish on your first several playthroughs in addition to replaying your favorite game sections. There is still a ton of replay value in the game because it has so many branching paths, and Chapter Select really aids with that. 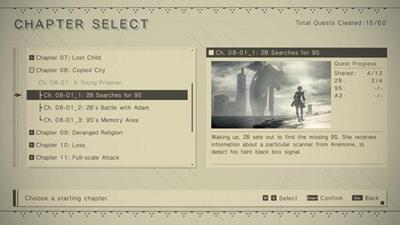 The Debug Room in NieR Automata

The Debug Room is another feature that can only be accessed after finishing the first three playthroughs. Players are free to engage in skill-based practice against a variety of enemies in the Debug room, a unique arena-like setting. It will automatically choose whichever android character you last used when you enter the Debug Room. To really test yourself in battle, you can tinker with the settings here to alter your character's stats, enemy behavior, the adversaries that are present, and more. 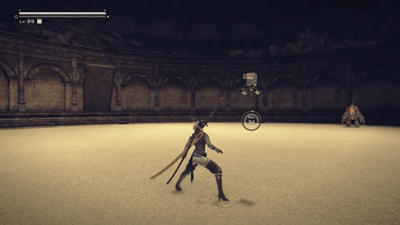 The creators included 21 additional minor endings, one for each letter of the alphabet after the five major ends. After obtaining Ending E, players can access and unlock these. Each one has a unique requirement. During any of the major five tracks, some games encourage the player to purposefully fail at a key job. Some advise the player to completely upgrade a weapon, avoid boss battles altogether, or even remove their own operating system chip. Although these endings are not canon, they are nonetheless a great way to add a bit additional material to the game. Players may also be able to replay the game and role-play using other options. 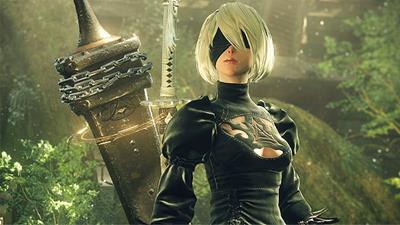 Can you play as different characters in NieR Automata?

Yes, you can play as 9S in your second Playthrough and A2 in your thris playthrough. Even while a second playthrough essentially follows 2B's plot, there are significant differences that make it worthwhile to play through again. Most significantly, you will get to play as 9S instead of 2B, who has a very different play style because he can hack into enemy machines. During your initial playtime, you probably noted that there were a few places in the plot when 9S and 2B split up. You'll get to observe what happened throughout these events because you're now in 9S's position.

The next replay will be significantly different when you have finished the game as both 2B and 9S and viewed endings A and B. Players will assume the character of A2 in a brand-new chapter of the story. For fans of the franchise, replaying the game twice to unlock the additional stuff may seem like a hassle, but this is where the plot truly picks up and becomes compelling. 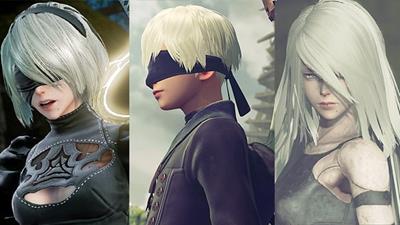 You'll be able to access the Secret Shop in the Resistance Camp once you've finished three different playthroughs, which entails taking on the roles of all three androids. The Strange Resistance Woman NPC is certainly a familiar face to you, but now you'll understand why she exists. When you speak to her and select the "Request unlocking you-know-what" option, a shop menu for the game's awards and accomplishments will appear. You can easily use in-game currency to purchase the remaining items you require if you don't feel like collecting your trophies in the proper manner. 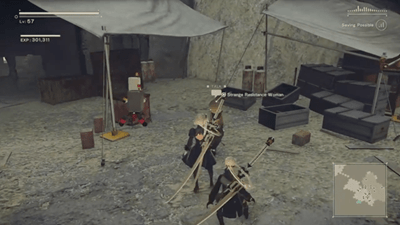 Easier Completion of Unfinished Side Quests

Players will have an easier time determining whether they have finished all of the side tasks in a chapter and area after they obtain the Chapter Select option. Players are urged to go back and finish all the side missions for unique rewards and achievements, like with any RPG. For these side tasks, players can learn more lore and gain experience points. A last decision players are presented with during a mid-credits epilogue can gain a deadly new meaning by completing the game in its entirety. 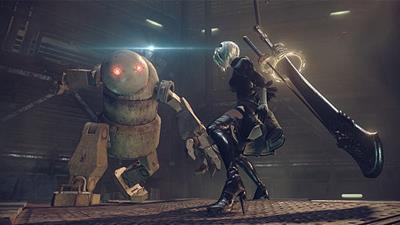