YoRHa No.9 Type S (9S) is a Playable Character in NieR: Automata. YoRHa No.9 Type S is also known as 9s and is first introduced fighting along side YoRHa 2B. As players progress through the game, he becomes the main protagonist if Route B where the game will then switch characters. Like 2B, he is a member or YoRHa, but is an S-type Model that specializes in scanning and investigative purposes. This means that his main special abilities are not focused on classic combat, but has other special features and abilities that interact with enemies in various ways to defeat them rather than the basic melee attack.

9S does not have heavy attacks or combination attack, but can instead Hack. Hack when you're close to an enemy to trigger a Bullet Hell mini game.If you manage to complete the mini game, the target will blow up, damaging nearby units. If you hacked an enemy that didn't notice you, you also get the option to convert or remote control the enemy.Tougher enemies require several button presses before they can be hacked, and they offer tougher mini games. Not all enemies can be insta-killed by Hacking them.Several Plug-in Chips offer effects that are specific to Hacking, and if you have an Auto-Heal Chip equipped, then you will likely be fully healed at the end of the Hack. Being defeated in the mini game costs about 25% of your health. You can be defeated by absorbing three separate hits or failing to kill the target within the time limit.

One of the trickiest-and potentially very satisfying-enemies to take control of is a Linked-Sphere type. However, given that they aggro against you from quite a sizeable range not allowing a direct un-detected hack and various other issues, to get one you'll need to follow a very specific sequence and plan out what you intend to do with it afterwards, to not waste it.

Once you have control of a Linked Sphere, you may find you greatly appreciate its movement. Even though it still can't fully fly, it can still do very long-range "jumps" of a sort. The Dash button gets it instantly moving forward at roughly the same speed as an Android at max sprint (with the blurs showing behind them), and it can do this in mid air (as well as change direction). Combined with its slow "jump" this can allow for very long-range glides, and can get you access to areas you would normally have great difficulty reaching. You are still able to pick up loot, open standard boxes and even interact with NPCs while you're in a hacked body; you may find some quests like the Speed Race stages easier with it. The other flyers can't move like this; the Dash button does a short range backwards dodge move instead so they can't even glide-jump as far as what your Android can do.

Another very interesting one to control is the Reverse-Jointed Goliath. It also aggros from a long range so you'll have to use the same body-hopping process as you would for a Linked Sphere to get it. In a player's hands they have VERY serious firepower, with both rapid-fire dual shotgun blasts of shells and a powerful double beam sweep attack.

9S is the main character featured in Route B. This requires players to first get through the 10 chapters from Route A with YoRHa 2B featuring her perspective of the occurring events. Once Route B begins, players will find a similar sequence in events as seen in the perspective of YoRHa 9S instead. The story concludes once you reach the final playthroughs with YoRHa A2. Playing with the different perspectives will allow you to explore each Playable Character's different abilities.

We first see 9S in Route B when he is tasked to Disable the enemy's defense systems as the YoRHa troops commence their descent as informed by Operator 210. The sequence in events here will feature the same ones featured in Route with 2B, however this time it is played in the perspective of 9S. This also changes the direction of the cutscenes during this playthrough.

As 9S progresses through his first objective, players will also get to see his first encounter with 2B. As he converses with her, she reminds him that emotions are prohibited. Players can continue through this route and eventually they will be forced to request the destruction of enemy hostiles via black-box reaction.

This will result in a reboot and they will both end up back in their rooms. 9S will assist 2B with her boot sequence and will go through some basic in-game settings with the player. Once you are released you will have a set of objectives that will take you through the route much like Route A is played.

Route B 9S Endings: Or not to [B]e NieR Automata 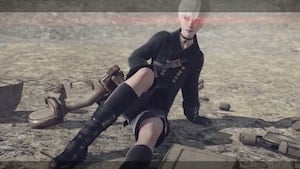 Spoilers: As you approach the end of Route B, you are reintroduced to the large Machines until 9S gains access to a memory storage and discovers something about the machines. From 9S's perspective you will hack further into some protected files including files from the moon server and some mysterious shipping documents. 9S will continue to dive into the servers until you he interrupted with a sound and 9S chooses to activate his body.

9S will be able to run into the commander and she will address the data about the installation of the Council of Humanity. These are the events leading up to the final battles of Route B which will result in 9S's file corruption when Eve detached to the network. 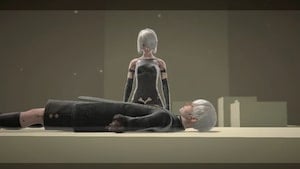 Ending C: Meaningless [C]ode. A2 has a chance to be a part of both Route C and D. She comes to face 9S and attempts to tell him the full truth. As the ending is approached, you will be given another choice between 9S or A2 before a final battle begins. Choose A2 and continue the battle. This eventually allows A2 to enter and attempt to repair 9S's logic circuits. An alert will appear warning herof Severe cirus corruption and a low probability of successful deletion. Successful reaching the logic circuits will give you the ending C: Meaningless [C]ode. 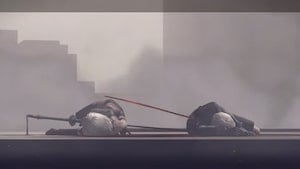 Ending D can be achieved similarly by choosing the alternate option when A2 and 9S face each other during their final encounter. To achieve ending D, choose 9S instead of A2 when given the option. This is followed by a few glimpses of 9S's thoughts and memories and then a final cutscene leading you to ending D: child[D]hood's end.

"I find myself in a bizarre memory storage area stretching as far as I can see.

It's a maze.
A labyrinth.
A massive interconnected network.
I've never seen anything like it

It must have been created by the machines.

So then...what am I doing here?

Large portions of my memory may have been destroyed...

What if I forget everything? My memories? My self? My...

The recovery program begins to fill in the blanks in my memory.
They drift back like missing letters filling out a word.

Preservation mode was activated at the moment of the blast.
It halted most of the safeties the network had in place.