Red Girl is a Boss in NieR: Automata. Red Girl or N2 is one of the main antagonist of the game. She represents the ego of the Machine network. Bosses are special larger Enemies that can be encountered throughout the game in different Locations. A Boss encounter will usually signify game progress or a chapter ending when following the main storyline. Some of these bosses may first be encountered As NPCs to introduce some Lore and backstory before they are inevitably faced in a Combat encounter as a Boss. Boss encountered are identified by their introductory title that will be displayed just before combat begins. Their HP bar and Level will also be displayed above the character throughout the combat encounter. Some bosses in the game may be optional and avoided. All information on optional or required bosses stats, Locations, encounters and strategies can be found on their designated Bosses

Official name: "Terminal". A program projected by the network server of the machine lifeforms. The self-evolution program installed by the Pods eventually fractured its ego, causing the various aspects of its personality to turn on each other.

While these units can be killed using normal methods, the only way to destroy them permanently is to allow the Pods to 'fracture its ego'. This is done by not killing the programs and simply waiting.

The only attacks this unit uses are slow energy projectiles however these quickly become a problem once the program starts to multiply itself. The natural reaction would be to continue to clear her clones, however as you progress you will eventually be instructed to allow them to multiply. Since they are static, you will only have to avoid the projectile orbs they release. These move slowly and are not released in a flurry so continue to move around the area to avoid contact until you progress.

If you are successful, you will be informed that the enemy consciousness has begun to fracture. This will take you into the next Phase. They will then be in conflict with each other. They will start to whip and strike at one another, slowly clearing themselves away. Keep your distance to avoid damage. You can also speed up the process by attacking a few of them. This shouldn't be any trouble since they will not be focused on your character. 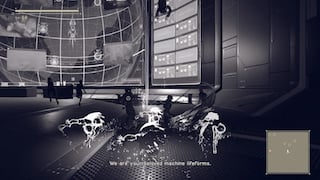 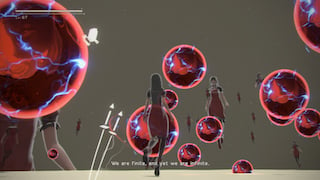 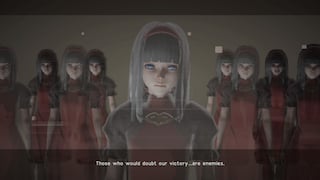