Forest Zone is a Location in NieR: Automata. Located not far from the City Ruins: Near the Tower access point. You will head there on the quest: The Forest Kingdom. Locations can be discovered in the game as players progress through the main storyline and quests. Each Location in the game will have its own set of unique interactions, Quests and Characters. Eventually, players will have access to each location's Access Points which can be used to travel back and forth to previously unlocked locations. This is the game's method of Fast Traveling. This page covers all known points of interest, significant Items, Enemies, Bosses and NPC encounters in this area.

Upon arriving you will need to trigger a dialouge by heading to the left of the locked door. After doing so, you will be attacked by some machines. Defeat them and head left. Located the access point there and trigger part of the Photographs quest at the waterfall. Be sure to loot Mushrooms, so you can upgrade your Pod. Then head down and defeat more machines until you reach a clearing with a LOT of enemies. Defeat them and then through the clearing up the hill.

Up the hill is another clearing with more machines in formation. Head through some nearby bushes and head up over some trees branches and rocks and you will come to a shack that looks like a metal silo. You will be attacked by a Boar and an Animal-loving Machine. If you defeat the Boar combat will stop and you can choose to spare him or kill him. If you spare him you will get Animal Bait x20, 5000 G and 1,150 EXP.

Continue following the edge of the map to a large waterfall and another batch of machines to fight. Behind the waterfall is an Apologetic Machine. Speak with him and he will explode. Keep following the top edge of the map and exploring for loot amist the aqueducts. There will be another group of machines ahead near the bridge. Head across the bridge and into the castle-like area.

Defeat the Goliath Biped and Medium Bipeds here.You will then find a broken bridge structure that leads into the castle portion, and unlocks an access point Forest Castle: Front. Drop down to the castle yard and gather materials near the gate before going in. You will be attacked by level 20 machines. Go forward until you reach a broken section and instead of goin up jump and dash across to open a chest containing Small Recovery. Drop down to the lowest level and go back one room, a chest with Melee Defense Up (L) and a Medium Quadruped await here. Proceed to the next room and drop down a level, then backtrack and jump across a gap to obtain Melee Attack Up (S). If you continue to the lowest level and go outsied, another Medium Quadruped will attack along several Small Stubby machines. Proceed onwards to the next portion fo the castle. You will be attacked by more machines, then go up to the second floor and past a room with several knight statues. In the next room, a Linked-sphere Type machine roams. Defeat it and continue onwards, finding your way through ladders and broken passageways. You will come across chests you cannot use now, and some useful items. Double back on the upper floors towards the entrance, past another Linked-sphere Type, Beyond it, unlock the access point Forest Castle: Royal Chamber.

Continue past the several machine enemies towards an open area with what looks like a baby machine. Here, you will meet YoRHa A2 and your main quest will update with objective: Destroy YoRHa prototype A2.

Fight with the YoRHa unit until it flees, then pursue it downwards to trigger an event with command. This unlocks the connection door between the Machine Village and Forest Zone, and the next main quest: Report on A2.

Enemies in the area:

NPCs that can be found in Forest Zone:

Merchants that can be found in Forest Zone: 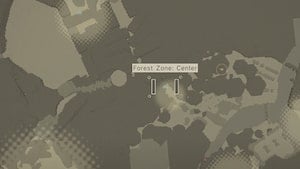 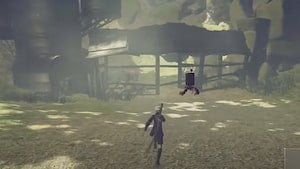 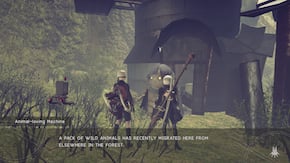